Last week, Originate spent half the week/weekend in  f#cking hot Las Vegas, for our annual retreat- well, Attack, actually. “We don’t retreat, we attack”, I was told in my initial interviews. What I was promised was 3 days of face-to-face interaction with everyone in the company (our offices are all over the world, not just the nation), with quite a bit of time spent primarily socializing. I heard some wild stories from last year, which certainly set the stage for what turned out to be an eventful trip. I would tell some of the better stories but, (excuse the cliché) what happens in Vegas, stays in Vegas.

What didn’t stay in Vegas was my new-found interest in photography. I know, quite a jump there…

On my first day in Vegas, the day before the Attack officially started, my coworker Amanda (“Attack CEO”) asked if I would mind being in charge of the video camera we were going to rent. The idea was to just capture the talks on Friday in the ballroom of the hotel we were staying at. So, without having any background, other than taking super high-quality selfies with drunk sorority sisters at frat parties in college, I said I was up for the task. We rented a Canon eos 5d for the task, which had a huge lens on it. To get acclimated to it for Friday, I experimented with the camera all of Thursday. I took hundreds of pictures of all of the Originators working in groups (basically an hour-long hackathon), and I have to say I was pleasantly surprised by how well they came out. Here are a few of my favorites: 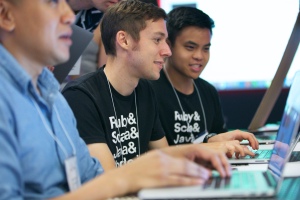 I texted Nathaniel excitedly at one point, saying how much I was enjoying creeping on everyone, taking pictures. Okay, that’s not how I said it. But there were definitely moments where I felt like I was stalking my coworkers. Either way, there was something very intriguing about finding the right angle and lighting and making sure the focus was just right. I had never given someone taking a picture much thought, but when you’re behind the lens you understand that there are good and bad ways to frame a shot. Bottom line? I want more! Nathaniel said that as soon as I told him how much fun I was having, he started looking at beginner cameras. I have been doing the same (almost daily) since returning, and I am pretty set on learning more. I would love nothing more than to take a high-end camera to a baseball game and capture spectacular action shots or players’ pensive moments between plays. I’m sure a lot of my test period would be spent with my favorite subject- my handsome roommate…Anyways, I have a birthday coming up next month so maybe I’ll have to treat myself to one of these bad boys-

Any and all suggestions for a photography wannabe-newbie like me are not just welcomed but greatly appreciated!