What a week. Every day has been packed with more exploration, new friends, and some very very late nights.

On Thursday, I had an interview after work at an upscale restaurant in Brooklyn, called The River Cafe (http://www.tripadvisor.com/Restaurant_Review-g60827-d482173-Reviews-The_River_Cafe-Brooklyn_New_York.html) As you can see if you follow the link, is that it is the number 1 rated restaurant in Brooklyn, and for good reason. The 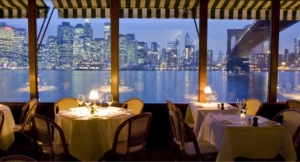 driveway is cobblestone, surrounded by beautiful gardens. When the doorman lets you in, you find yourself in a Gossip Girl Sunday Brunch-style dining room with sweeping views of the city. It’s a bit intimidating to imagine working there, where the expectations are much higher than in my previous hosting position. However, it would be quite an experience rubbing elbows with such an upscale clientele- it’s said to be the regular watering hole for rich investment bankers, professional athletes, and movie stars. I find out if I got the position on Tuesday.

Later that night, a friend from work and I went out in the city with a friend of hers from the student housing she is living in. We went to the pub which inspired McClaran’s in “How I Met Your Mother”, first, which although it does not look exactly like the pub in the show, is still very cool. There are pictures of the cast all over, and drink specials at 8pm on weeknights, when they play episodes of the show. Speaking of which, I really need to catch up on season 7…

Yesterday, I met up with a friend of a friend during the day, and along with her friends from college, we explored the Highline (an old railway turned into a park) , then picnicked in Central Park for the afternoon. Later last night, we met for drinks and dinner by Penn Station, before heading out to the bars by NYU. The bar we spent most of our time at was called “The 13th Step”. By 1:30, I was feeling good and tired, and wanted to go home. However, somehow I was convinced to stay until 4am… I can safely say that I have never been out at a bar as late as I was last night.

Due to sleep deprivation and resolute laziness, I am quite set on doing nothing today. However, I feel guilty not doing at least something with my time, so I believe I will head to Target to get a pillow (mine is small and lumpy), some towels, etc. So domestic. Anything to get me out of the house, if only for an hour.

While all of this is rather mundane I suppose, I think I am keeping it more for myself than anything. After last summer, I was so thankful to be able to look back and read through my adventures on the ranch. Initially, while writing about my experiences, I had thought to myself, “there’s no way I could forget”, and now to this day find myself surprised at some entries, as I had forgotten some details of my days there. So, I am promising myself now to be better this summer than last about detailing every little adventure.

Anyways, off to do something with my life for a change. More soon!